A Day in John’s Life 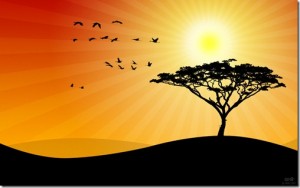 On the way he met his cousin, Bill, who was also cycling. They had a happy life in the countryside. The school was 5 km from the village.

Bill: Shall we ride as far as the school and back?
John: But school is closed, you know.
Bill: We will ride for fun.
John: Well. Why not?

Then they began cycling to school. It took them only five minutes. They met some friends at the school garden. They were playing basketball. They asked John and Bill to join them. Bill was willing to play. He liked playing basketball and he was good at it. However, John didn’t want to play. “There are too many rules in this game”, he always said. But now he thought to himself, “Bill is going to play and if he joins the game I will have to play too. If I don’t play, Bill will be upset, but I don’t want to upset him.” So they both joined the game. It was enjoyable and exciting for Bill boring and difficult for John. Then the game was over and Bill’s team was the winner. His team-mates (=friends) were carrying Bill on their shoulders because he had played very well and enabled them to win. John was in the loser’s team but he wasn’t unhappy. On the contrary, he was happy because Bill was happy.

Then John told Bill, “How about a race back to the village? I am sure I will beat you in that” In reply to this challenge Bill said, “No, you can’t. I can beat you in cycling too”. Then an exciting race began. At first Bill was Bill was cycling faster than John. John, who was a famous cyclist, didn’t want to be the loser this time. So, he stepped harder on the pedals. He got faster and faster. Finally he could pass Bill and he was the first to reach the village; he was the winner. John was happy. Bill wasn’t unhappy.

It was almost the evening when they reached the village. John invited Bill for dinner. Bill happily accepted his invitation because he loved his aunt’s meals. When they reached home they were surprised to find that Bill’s family was also there. John’s father had invited them for dinner. After dinner, they began to talk. The boys told their parents about the day. It was exciting for them and enjoyable for their parents.

At 10.00 pm, John went home with his family. He would go to school tomorrow. So would Bill. They needed sleep. It had been a beautiful but tiring day.

I think it is a terrible story, i dont like it but thanks.

It was terrible and boring but thanks

I love the story so much , it’s very enjoyable and very basic

ı don’t like this story because very boring and abstrük.but thank a lot…

this story ınstructive, ıt was remember words like as long as, also, such a. thanks.

hey I love this story I enjoy, thanks